About halfway down the lake, I saw an island in the center, and decided to investigate, since it was time for a break to stretch my legs.  I expected that the landing would be thick, red, clay-based mud, but it was firm gravel and sand, so I was out for a walk.  To my surprise, an old building sat in the middle of the island, obviously dating back before the flooding of the region, and constructed of the same red cobblestones seen in Medicine Park.  The lake level was down about four feet, but during higher water, the washing of the waves against the foundation of the building had undermined the walls, which had collapsed.  A concrete front porch is still evident, but trees have grown up through the center of the remains.  I originally thought it had been an old home, but I called the lake office to investigate it and the two large concrete structures I had found in the first bay north of the campground.  It turned out that the building had been a small store.  The concrete structures, and another between them that is totally submerged, were piers for a bridge that carried the road out to the store. 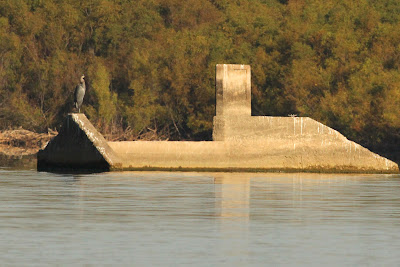 As I entered this bay, I was curious about two huge monolithic
concrete structures I encountered, this one with a cormorant
perched on top.  The docking cleats mounted on top were even
more bizzare.  Looking closely, you can see one on the top near
the right end. 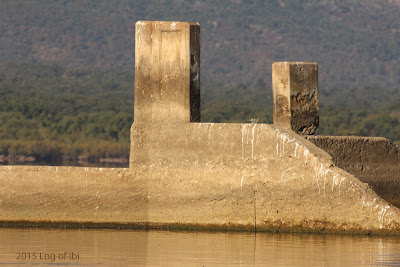 Viewing the two structures together with the docking cleat again
visible on top. 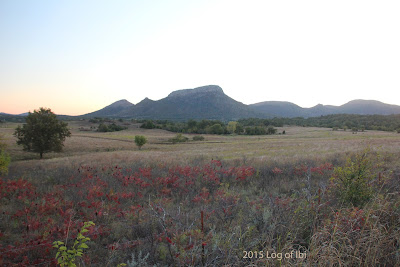 Looking across the prairie towards the mountains as
sunset approaches, and viewed from the north end of the lake.