A Trip to the Top 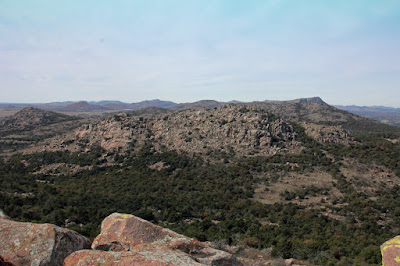 From the top of Mount Scott, you can look down the chain of
mountains that, one behind the other, line up to look like the
teeth of a saw.

Mount Scott was named for General Winfield Scott (1786-1866), the longest serving army general in U. S. history.  He was commissioned a captain of the Army’s Light Artillery in 1808, shortly before his 22nd birthday.  Serving as a commissioned officer for 53 years, he held a general’s rank for 20 years.  You can name any conflict between the War of 1812 and the Civil War, and Scott was either there or otherwise involved.  He campaigned for the Presidency in 1852, but was defeated by Franklin Pierce. 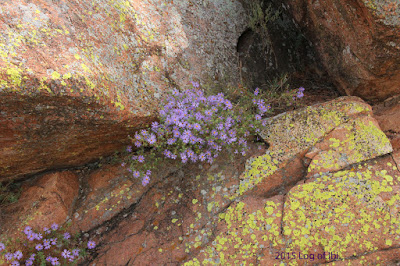 It is amazing that delicate flowers can persevere to grow in the
most hostile and uninviting places.  Maybe there's a lesson
about life here.

A road corkscrews around the mountain to its top.  It has several overview pull-outs where motorists can stop for photography, but the view of the plains and mountains from the summit is worth the wait.  The road was opened in 1938.  A private company was given the contract to build the road in 150 days.  They went bankrupt and destroyed all their equipment when they faced solid granite walls 20 to 60 feet thick.  Engineering was obviously new in the area, as they were surprised by how hard granite was to drill and break, even with explosives.  Ironically, the boulders are broken up by lichen, a symbiotic combination of algae and fungi, which sends its roots into the granite, making it more and more porous over time and susceptible to weathering.  The mountains become smaller boulders, rocks, stones, gravel, sand, and ultimately the ubiquitous blowing Oklahoma dust. 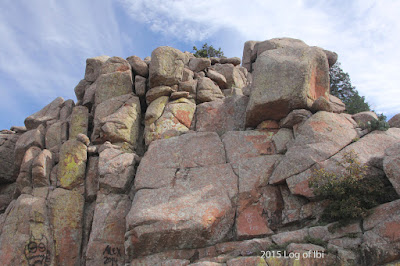 Unlike most mountains where earth settles into the crevices to help
settle boulders in place. these just remain in place out of habit and
some fine and seemingly insecure balancing acts.

Leaving Mount Scott, we continued into the Wichita Mountains National Wildlife Refuge.  Elk were reported to be in the area, as well as buffalo.  The 59,000 acre wildlife area runs along the north boundary of the Fort Sill Military Reservation.  The artillery explosions continued all day, every day, and signs along the roadway, reading “Caution, Impact Area”, warned against getting out and wandering about.  Also, this is still a wild area in spite of the presence of humans passing through, and an artillery officer had been struck and killed by a rattle snake just before our visit.  We saw buffalo, properly called bison, but elk are best spotted at sunrise and sunset, and we missed out there. 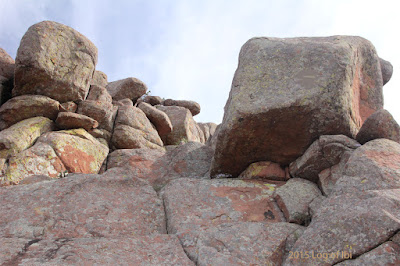 I found the orange and yellow lichen interesting.  You can see
the orange here, with a touch of yellow, but a lot of yellow around
the pictures purple flowers.