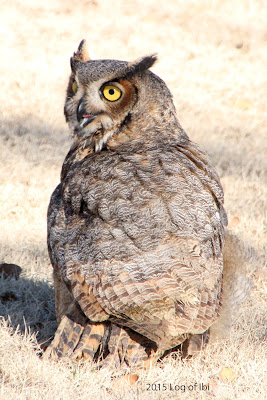 I haven't processed the last of the Medicine Park photos, so here's a diversion.  Jean received a call from a farm manager right after a two-day ice storm.  He had seen a great horned owl that had flown into a fence near Okeene and gotten its wing entangled.  The bird was smart enough to know that its weight couldn't be held by its wing alone without damaging the wing further or even severing it, so it had reached up with one foot to grasp the fence and take most of its weight.  The man felt confident the owl would get itself free, so he went on.

While making his rounds the following day, the manager realized that the owl was still hanging from the fence wire.  The ice storm had completely frozen birds over in half to 3/4-inches of ice, and most of the local population of big birds has disappeared, so it's amazing that the owl had survived the cold, the ice, two days with no nourishment or water, and hanging upside down from a wire.  It was after dark when Jean and the farm manager got back to the field to retrieve the bird and bring it home.

The bird was in bad shape.  It took a lot of water infused with Pedialyte immediately, and Jean went to the store to get chicken livers and steak to cut up and feed the owl.  The foot and leg were so sore and cramped up from being locked on a wire for two days that it couldn't stand or roost even the next day, and just crouched in a bed of straw in the bottom of the cage.  Jean fed it with long kitchen tongs.  It would hiss and snap at her, but after the first bite, settled down to be fed.

When it healed enough that its wild, aggressive personality and strength had returned, it made it clear that it wanted out of the cage.  Since owls are very territorial, we returned it to the same spot where it had been picked up.  When the cage was opened, it just sat there.  Jean finally had to roll the cage over slowly to force it out through the open door.  It just sat for the longest time, but finally hobbled over and got under a piece of farm machinery.  It had been moving its wing, but in the confines of the cage couldn't stretch it fully or exercise it.  We watched it for awhile, but it made no move to leave.  It was obvious that it was sore and stiff, so we left it to give it time to stretch and limber up.

It was a restless night, wondering how the bird was doing.  The next day, we headed 22 miles back out to the farm as we wondered if we'd find just a pile of feathers where something had been able to catch it.  As we approached the farm, a huge great horned owl took off from a utility pole diagonally across the road from where Jean had found it.  It flew strongly, circled, and glided until it disappeared over a line of trees.  It had to be the same bird.  Another owl's territory would be at least a mile to six miles away. To be sure, we checked all around the farm equipment and looked through the grass and cedar trees. There was no sign of an owl.  Jean's rescued bird was back on the hunt for rodents, but I can't help but think it was wondering, "Hey, when is that woman supposed to show up again with the steak."

An ironic twist to the ways of nature revealed itself on our return home.  After saving and treating the owl, we got back home to find another owl in the tree in our yard trying to catch one of Jean's rescued and hand-raised squirrels.