The Montreal Canoe and the Voyageur 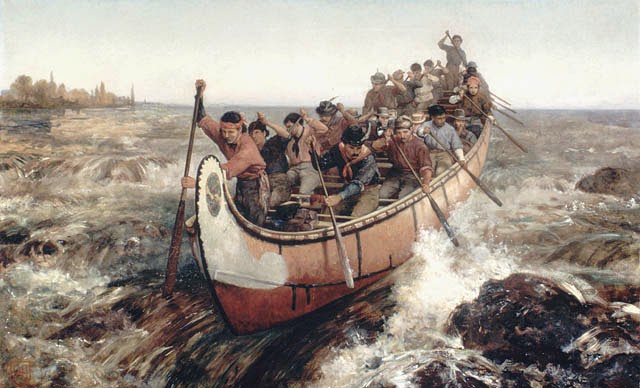 As we read the history of expeditions into the New World, we find a nearly unending string of deaths and failed expeditions, especially into the Arctic regions, because the explorers were determined to use European gear and clothing, and stubbornly convinced of their superiority.  The prejudice was indeed spoken out loud that certainly no uneducated indigenous populations could know more about surviving on the barrens and tundra than the Europeans.  Success in exploration and survival didn’t come until the white men finally decided to try local ideas on clothing, footwear, and shelter.  One of these local innovations that the Europeans had no match for was the canoe.

The word canoe comes from the Carib Indian (Caribbean and South Florida) language for the dugout, the ‘kenu.’  The Spanish in the area called it a ‘canoa.’  While there is archeological evidence of a canoe-type craft in the Netherlands dating back 8,000 years BC, the craft was never refined or developed there for continuous use.  The much lighter and more versatile birch bark canoe, however, was a refinement from the First Nations people of North America, or what became known as Canada in 1867.  Since nearly half of the region’s geography is fresh water, about 400,000 square miles of nothing but water, constantly crossing lakes and rivers, hunting for food, warfare, and being able to move from one body of water to another, made the light birch bark canoe essential for survival.

The personal canoe was generally 14-16 ft. in length, and weighed up to about 50 lbs., which is still quite competitive with the weights of canoes out of modern materials.  To build a country and create its commercial trade, however, a work horse was needed, and that was the Montreal canoe.

Few people think about it, but there is virtually nothing you can touch today that did not get to you by truck.  Many items are moved totally by truck, from raw resource, to manufacturer, to distributor, to store, and to waste disposal after consumption.  Our lives would not exist as we know them without the tractor-trailer, and for that period in history, the 1600’s until the 1900’s, and in some regions until the 1960’s, the Montreal canoe was the region’s tractor-trailer.  The Voyageur, or shipping canoe crewman, was the truck driver and lumper of the day.  They carried European and East Coast supplies into the wilderness, and exchanged them for hides, which were carried on the return trip for shipment back to Europe.

Montreal canoes were 35-36 feet long, with a beam of up to 6 feet.  The shipping trips would commonly involve 3-4 canoes traveling together.  Each of the canoes were crewed by around 10 voyageurs, and carried 65 bales of goods, which with the crew and their gear could total as much as 8,000 lbs.  The voyageur started his day before dawn, and generally without breakfast.  Breakfast would wait for one of the day’s early rest stops.  They paddled 14 or more hours a day, averaged 50 miles a day, and maintained a 45-55 stroke/minute paddling cadence.  After each hour of paddling, they would make a rest stop, which was measured by the time needed to smoke one small-bowl pipe of tobacco, and often without getting out of the canoe.  When they couldn’t paddle because of rapids, they would line, pole, track, roll the canoe across short land obstructions on log rollers, or more commonly portage with 4-6 voyageurs.  All hides and freight were pressed into 90 lb. bundles, and each voyageur was responsible for portaging six bundles from take-out to put–in, carrying two bundles at a time.  While most portages were more reasonable distances, one was eight miles and another 12 miles long, in which case the voyager carried for a half-mile, and rested while walking back for the next two bundles, and was expected to complete the round-trip in an hour.  Thus the longer portages were made in stages across the total distance.  The voyageurs commonly wore colorful sashes around their waists.  Voyageurs had little room in their lives for fashion statements.  Many think the sash wrappings were to help prevent hernias from the heavy loads, as strangulated hernias were an agonizing and not uncommon cause of death for these men.

The early French trapper/traders were usually independent and solitary operators.  In 1670, however, the Hudson Bay Company was created with a one-and-a-half million square mile grant from Charles II.  That is 40% of the land mass that became Canada.  Unlike the French trappers who received little or no support from the French government, the officers of the Hudson Bay Company were well connected both politically and financially.  The beauty of the Hudson Bay Company was that their ring of forts and posts around Hudson Bay and westward into the interior cut the time needed to complete a round-trip into the wilderness and back by half as opposed to going all the way back to the St. Lawrence River.

Voyageurs were now HBC employees.  The Voyageur signed a five-year contract with the company.  To fill these positions, the Hudson Bay Company needed to find men that were used to being close to starvation, living on a diet of half lard and half corn, accustomed to hardship, miserable weather, lives of privation, and very limited resources.  They looked to Scotsmen from the Orkney and Shetland Isles on the Northeast coast of Scotland.  During the Napoleonic Wars roughly a third of their male populations were pressed into the military, most into the Navy.  More were pressed into service on Arctic whaling ships.  The collapse of local fisheries, the failure of crops, and the eviction of farmers from their lands by rich land owners left few resources for their survival at home.  During this period, roughly a quarter of the islands’ populations emigrated to North America, Australia, and New Zealand.  Many who found their way to North America sustained themselves with canoe paddles.