Take Me To The Water 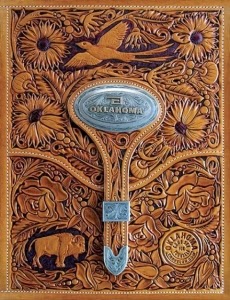 The Oklahoma Travel Guide
For those of you in Oklahoma, (or from elsewhere, if you’re headed this way) if you have a “Oklahoma State Parks and Outdoor Recreation Guide” that’s more than a week old, the Dept. of Tourism has just received the new 2015 updated edition from the printer. Also, the Oklahoma Travel Guide for 2015 is a real beauty, with a reproduction of a tooled-leather cover done by Minco artist, John Rule.  The form for ordering free travel brochures is at:  http://www.travelok.com/brochures
If a guy believes one kernel of corn is the same as an entire corn field, he’s a Republican and understands how to spin “truth” so one kernel of truth becomes the whole truth, like the Keystone XL being good for the American economy (all 1% of it) and creating thousands of jobs (well, actually only 35 of them).  So, when I saw this following line in my current issue of the outdoor recreation guide, I had to wade into the corn field and check it out.  Under paddling activities, it reads, “More than 600 major creeks and rivers mean Oklahoma has a river ride to suit your taste.”  After a call to the Dept. of Tourism, they had their in-house kayaker call me back.  I told her that the guide advertised 600 major creeks and rivers, but then listed only four.  If there was a guide listing creeks and rivers that are actually paddleable, I’d love to get a copy of it.  She admitted, “I don’t know about that,” but said she would get up with their fact checker, and call me back.
To her credit and the tourism office’s, she spent over an hour or more checking for more information for me, even doing an internet search.  When a state agency spends part of an afternoon serving the interests of a single individual, it has to be appreciated.  When she called back, we concluded that there may be 600 creek beds and riverbeds in the state, but few are major and fewer still have any water in them.  She offered one site you may wish to look at:  http://geology.com/lakes-rivers-water/oklahoma.shtml/  This brings up the Oklahoma page, but in the left margin are the links for all other states you may wish to check.
The tab for “Stream and River Levels” shows daily readings for all reporting stations.  For those in this area, I’ve found two other good sources for Oklahoma to be: http://southwestpaddler.com/indexOK.html/ and http://www.oklahomaroadtrips.com/
Keep those paddling dreams alive.  Warm weather has to be getting closer.
﻿