We have a neighbor that hates squirrels, because he is jealous of the pecans the squirrels might eat off his tree.  We'll call him Howard. A few years ago, we had a real laugh over Howard and his squirrels.  Howard was using a humane trap to catch squirrels from the nearby public park. It was from there that the squirrels were commuting to dine on Howard’s pecan tree. He would load the traps into his pickup and drive them a couple miles outside of town to release them in a wooded area near a farm.

Some of the neighborhood men have a coffee klatch at the local drugstore. Kidd Drugs has what must be one of the few remaining real soda fountain counters. One farmer sitting there was lamenting about being overrun by a huge increase in the local squirrel population. To reduce the numbers, he was having to trap the squirrels and bring them to town to release them in the public park. We cracked up over the image of these squirrels spending a day at the farm and a day in the park, while waving to each other as they traveled back and forth between.
﻿ 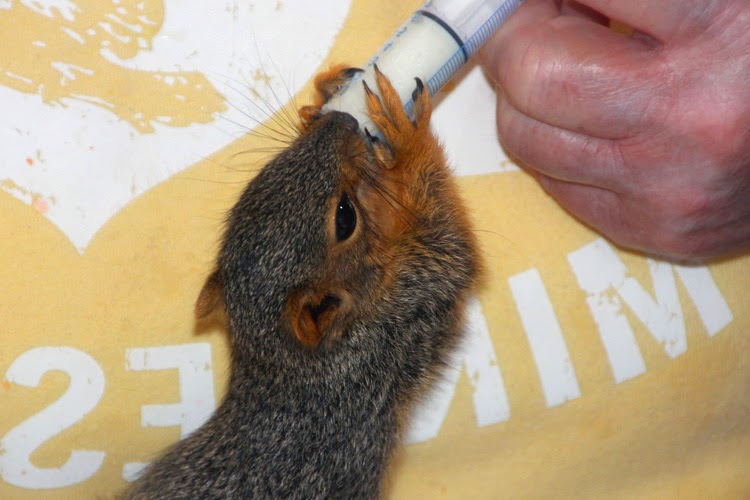 The camera flash was scaring them, so I starting taking their
pictures in a mirror, which they didn't seem to mind.  That
is what makes Minnesota read backwards.
Jean is a licensed caregiver for injured and orphaned animals. A few weeks ago she got eight orphaned squirrels, four each from two nests. Their parents had been killed on the highway. She uses a syringe to feed them fortified kitten milk replacer until she weans them onto solid food. They can latch onto the syringe and suck so hard that they will pull the plunger into the syringe barrel. Jean has to hold back pressure on the plunger to keep them from choking or drowning themselves. The two litters are apparently just a few days apart in age, based on the comparative rate of developmental changes, so it’s impossible to tell one from another. I deal with this by calling whichever one Jean is feeding at the moment Howard. She doesn’t like naming them, because it makes the separation anxiety that much worse when she has to return them to the wild and say goodbye  Jean says that once they are released, they stay nearby for about three days as they become acclimated.  We’ll go camping with them as they venture forth a bit more each day, returning occasionally for yet one more bit of food from the more familiar source, the two-legged Mommy.