Some More Reason to Go Paddling 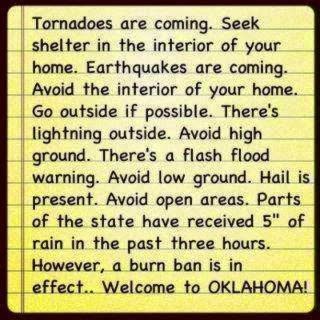 I try to give credit, but don't know the source of this.  Anyhow,
nice job, and my apology, but it was too nice to pass up.

I received this email from a friend in Florida. When thinking about why we enjoy going paddling so much, nature and wildlife are certainly legitimate reasons, but escaping two-legged wildlife has to be added to the list. This was called “Idiot Sighting: Our Society is Doomed.”

I handed the teller at the bank a withdrawal slip for $400.00. I said, “May I have large bills, please?” She looked at me and said, “I’m sorry sir, all the bills are the same size.”

When my husband and I arrived at an automobile dealership to pick up our car, we were told the keys had been locked inside the car. We went to the service department and found a mechanic working feverishly to unlock the driver’s side door. As I watched from the passenger side, I instinctively tried the door handle and discovered that it was unlocked. “Hey,” I announced to the technician, “It’s open!” His reply: “I know. I already got that side.” This was a Ford dealership in Canton, MS.

We had to have the garage door repaired. The Sears repairman told us that one of our problems was that we did not have a ‘large’ enough motor on the opener. I thought for a minute, and said that we had the largest one Sears made at that time, a ½ horsepower. He shook his head and said, “Lady, you need a ¼ horsepower.” I responded that ½ was larger than ¼. He said, “No, it’s not. Four is larger than two.” We haven’t used Sears repair since.

My daughter and I went through the McDonald’s take-out window, and I gave the clerk a $5 bill. Our total was $4.25, so I also handed her a quarter. She said, “You gave me too much money.” I said, “Yes, I know, but this way you can just give me a dollar bill back.” She sighed and went to get the manager, who asked me to repeat my request. I did so, and he handed me back the quarter. He said, “We’re sorry, but we could not do that kind of thing.” The clerk then proceeded to give me back $1.75 in change. Do not confuse the clerks at McD’s.

In Wichita, KS, a stoplight on a corner buzzes when it’s safe to walk across the street. I was crossing with a co-worker of mine when she asked if I knew what the buzzer was for. I explained that it signals blind people when the light is red. Appalled, she responded, “What on earth are blind people doing driving?”

A child that attends a Kansas City, MO, school has the name “Le-a.” How would you pronounce the name? Leah? No. Lee-a? Nope. Lay-a? No. Lei?? Guess again. Her mother is irate because everyone is getting the girl’s name wrong. It’s pronounced, “Ledasha.” When the mother was asked about the pronunciation of the name, she said, “The dash don’t be silent.”

Think about it. They walk among us. They vote. They have babies. If this leaves you depressed, with your head hanging low, perhaps this will at least leave you with a smile on your face. The reason why baby diapers have brand names like Luvs and Huggies, while undergarments for seniors are called Depends, is because when babies mess their pants, people are still going to Luv’em and Hug’em. When old people mess in their pants, it all Depends on who’s in the will!
Posted by Unknown at 1:30 PM