Wallace Nutting on the Canoe

A Wallace Nutting Painting
Credit: google images
Wallace Nutting is one of Jean’s favorite artists. She was reading his “Maine Beautiful: A Pictorial Record Covering All The Counties of Maine,” (Pub. 1924 by Bonanza Books, New York, 296pp), when she came upon several pages of Nutting stressing his love and admiration of the canoe. Here are the highlights.

“It is natural to suppose that Maine, a state of waters, would develop the finest form of the canoe.--- The shape of this canoe is closely modeled on the lines of the Indian canoe of bark, with a round bottom rather flattened, and with the ends coming together in a quick, sharp, graceful curve. The shape is the embodiment of an Indian dream. We may think that the horns of the moon and the curves of the graceful birch tree, and the crescent beaches of the Maine lakes gave the suggestion. The result at least is perfection. The canoe combines more than any other human creation the practical and the ideal, reminding us of ‘the perfect woman, nobly planned.’ For lightness, for grace, for mobility, for its perfect adaptation to its purpose, no device of man has ever equaled the canoe. It is the home of the woodsman for the greater part of the year. Even at night he draws it on shore and, upturning it, has a roof above him. It is his home and companion. More than any other inanimate thing, it is lovable and beloved. We stroke its curves as we pet a fine horse. It is not without good reason that the canoe has appealed, in picture, song, and story, to the minds of those who discovered it full-grown and beautiful, in the hands of the adept Indian, who evolved it. To be at once a thing of perfect beauty and perfect adabtability to use, is true of few human creations.”

It is highly significant that the old guide gains an affection for his canoe, and thinks it, despite all the battering it has received, better than a new one. Never mind. After a few deft repairs---, the voyageur launches forth again, happier than before, because his own feeling and skill have entered into the craft that bears him. It is a monument to his ability as a boatman, and every scar is a kind of notch-stick history of his experiences in the rapids, from season to season. Like a child, none too perfect, it is the best for him because it is his. In winter he renews it, and the other three seasons he paddles it. It is at once his living and his life. It combines poetry and practicality, so that---his life is nevertheless an idyll.”

“The seat in the bottom of a canoe is a post of observation, more joyous and more profitable than the throne of a king. The world passes in review before one. The fish leap about one. The birds tweitter as one passes. The marks on the stones show the range between high and low water. The mosses on the trees and the direction of the brancches indicate the prevailing winds. The keen and experienced guide reads a long history and indulges in sure prophecy, as the canoe glides along. It is a story not read in history, but none the less worthwhile and delightful.”

“Contrary to the supposition of the unknowing, the canoe is a safe craft. One may, indeed, overset it, but the finest forms and implements used by man require delicacy of control, and when so controlled they are safer than more clumsy implements. It takes little practice to gain as great assurance of safety in a canoe as upon the land. One is far more likely to catch his foot in a root than to catch his keel on a rock. The use of a canoe encourages a certain litheness, combined with a daintiness of touch, which reacts upon the mind of the person who acquires these faculties, and gives a sense of power. One feels almost the assurance of a bird in the sky.”

Paddle/Camping shot of the day: Rick Eisele's trip to Alaska. 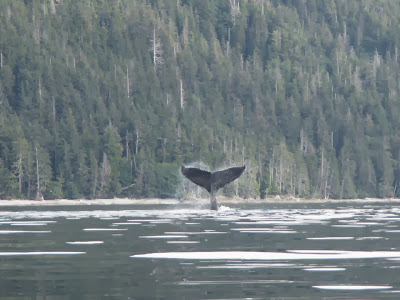