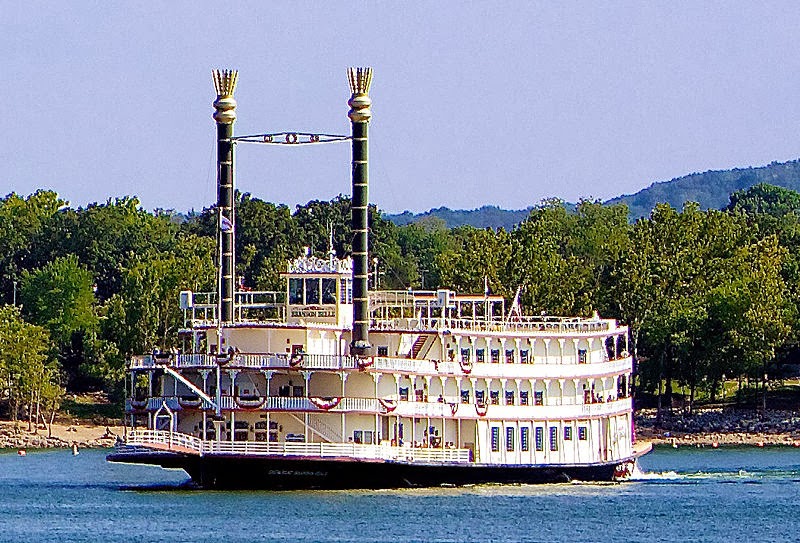 The Showboat Branson Belle
Now we come to the last aspect of the Branson Belle we'll bring you, the show itself. It wasn’t just a performance, but it was indeed about showmanship. By this I mean that those on stage were not just great musicians, but had to combine a great degree of showmanship with their music. For example, Dean Church, the fiddler, not only made great music, but did so while playing the violin between his legs, on his back, behind his back, and while riding a unicycle. 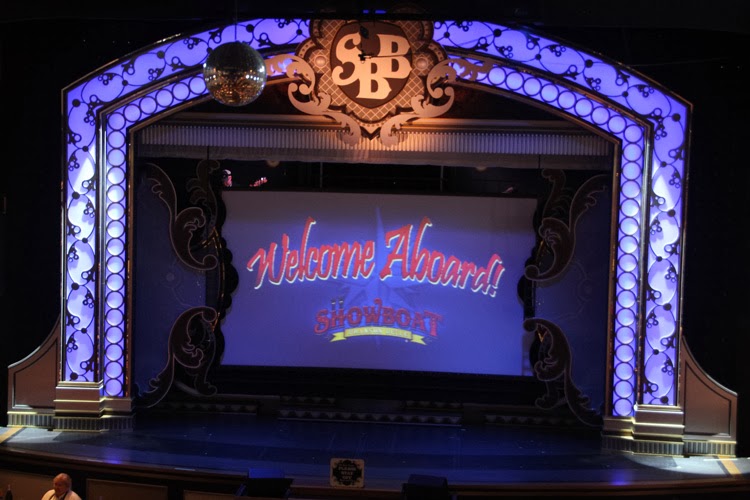 Our view of the stage during dinner.

Mike Bliss opened the show as master of ceremonies. For the other water-rats in the audience besides me, Mike opened the show by featuring the Branson Belle herself. A sight and sound presentation was done on her construction, powering, launching, and operation. 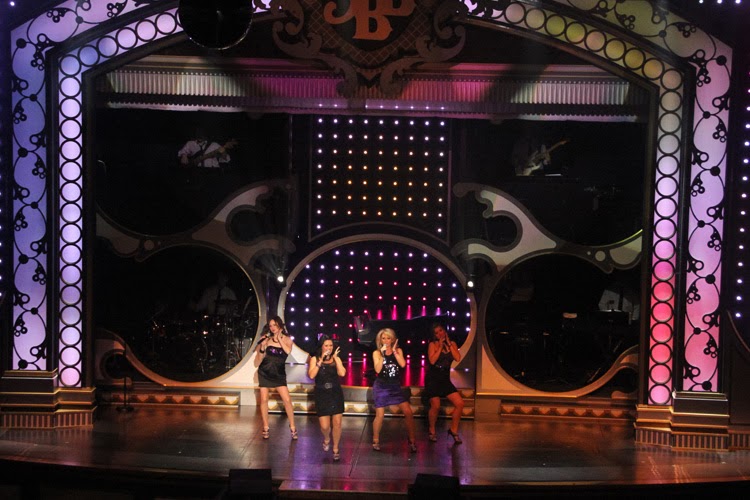 The ShowBelles and the Castaways.
Behind him was the stage set, and it took some time to realize the band was behind the set, in round “sound holes” that were covered with screen, so you couldn’t even tell the performers were there until a spotlight hit them just right. The piano was in the middle, with the other four musicians in the other corners of the set. Each musician, not content to play one instrument, was surrounded by an assortment of instruments that they would pick up as a the music required. To keep with the nautical theme, the musicians were the Castaways Band. 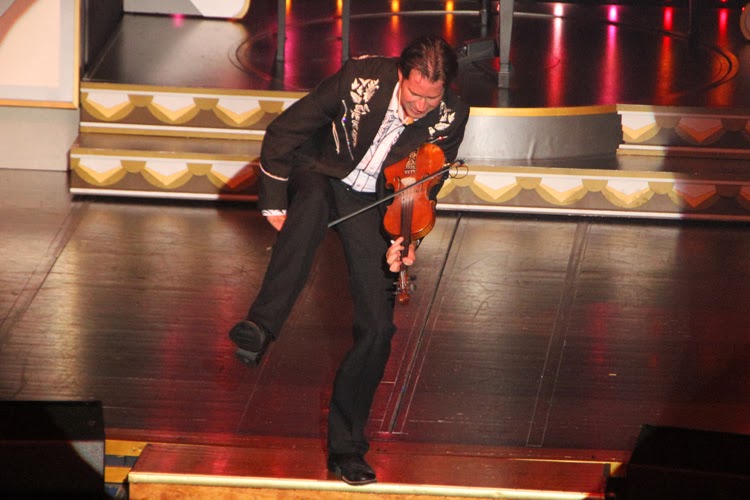 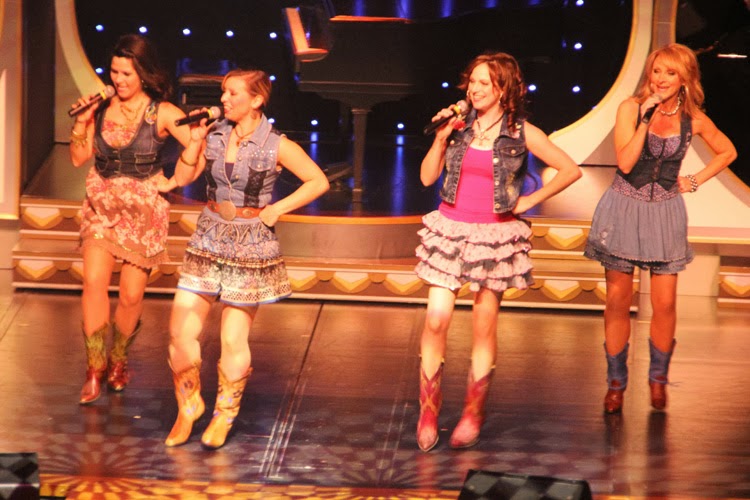 Then The ShowBelles, four singing dancers high-stepped their way across the stage, making several appearances. 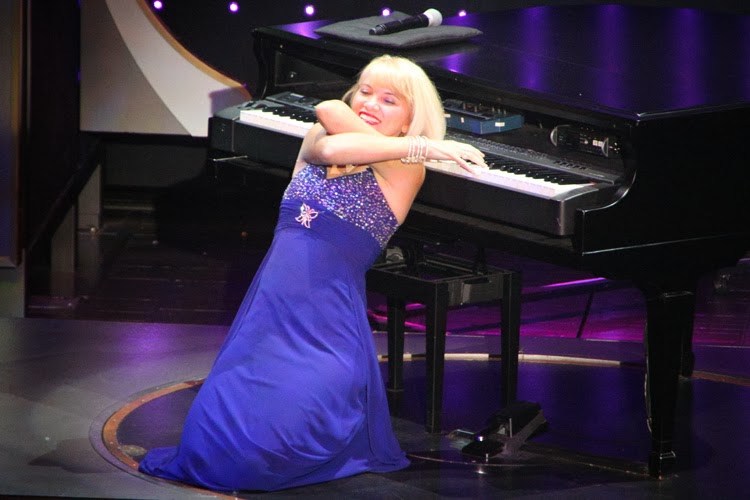 Julie McClarey, pianist, was extremely talented, and, keeping with the theme, not only made great music, but contorted herself around to play from every posture possible. The picture here is of her kneeling with her back to the piano, her arms wrapped around her neck, as she played backwards, performing, incredibly, Nicolai Rimsky-Korsakov’s Flight of the Bumblebee. 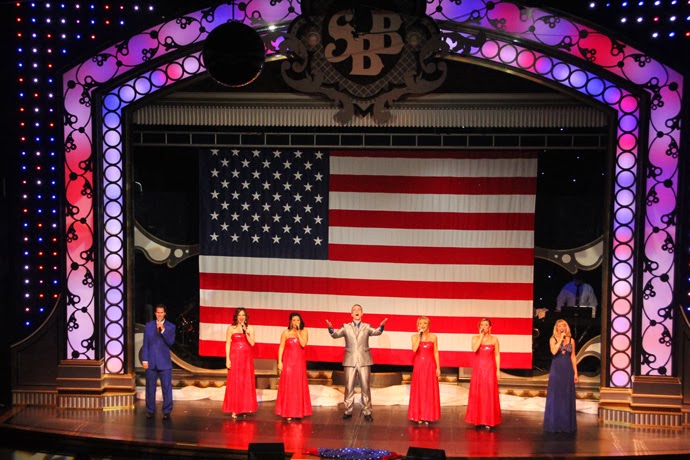 The Salute to America and the Troops
Our time aboard was fast-paced, and the time was jammed with activity and entertainment. Anyone that has spent any time in the service industry would have been fascinated by how 700 people were served each course of dinner almost simultaneously. In short, there was no aspect of the afternoon that wasn’t choreographed with the greatest detail and efficiency.