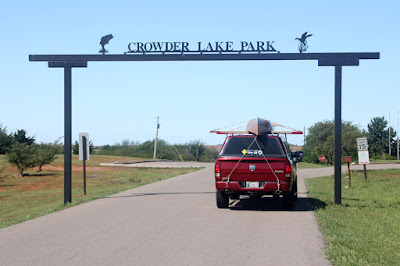 The Ram and Buddy at the Crowder Lake Park entrance.
I really enjoyed this trip.  I made this trip in June, which was before we returned to the drought and triple-digit temperatures.  I’d give Crowder Lake five stars for a day-paddle destination.  The body of the lake is small, making it accessible even when the wind is up, and there are several arms off the lake that provide protection from the wind.  They also offer interesting topographic and geologic features, as well as large patches of wild flowers which were in bloom at the time of the trip.
﻿ 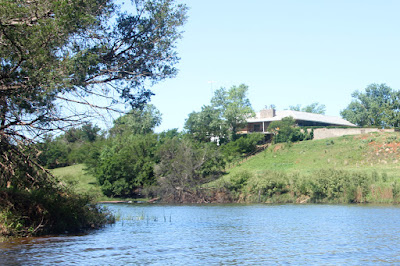 Whether a one-percenter or just real lucky, the owner of this home
has a beautiful commanding view of the lake and their own boat dock. 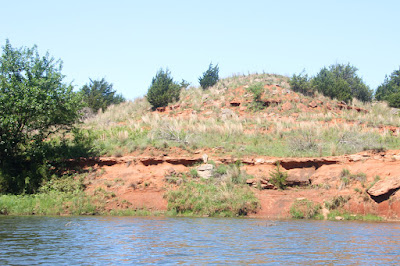 Layers of rock formation create ledges at the edge of the lake.
Crowder lake is south of Weatherford, OK, and is in grid F-2, page 40, of the DeLorme Oklahoma Atlas and Gazetteer.  The map of the lake appears on P. 62 of the Lakes of Oklahoma publication by the Oklahoma Water Resources Board and the Wildlife Commission.  The area around the lake is also nicely wooded.
The greens were brilliant and varied.  The dark cedars blended nicely with groves of hardwoods with a broad palette of greens.   People elsewhere in the country may not see the significance of this.  Here in dry, drought-prone Northwest Oklahoma we are used to living with a palette of browns.  Seeing greens is a big deal, especially when seeing such a varied and abundant display. 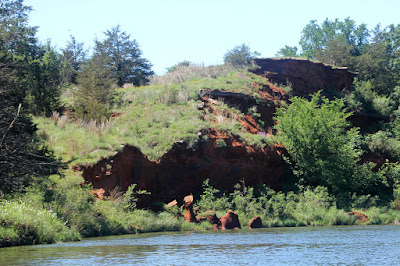 Bold ridges and cliffs have eroded into the lake.  See the pedestals
near the water's edge. 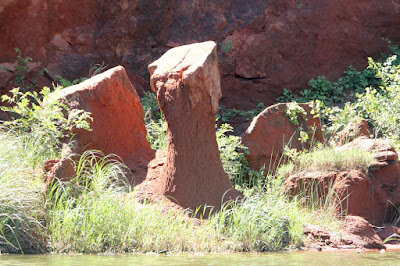 When the cliff broke away, the dirt slowly eroded and washed into
the lake.  A few rocks in the dirt, however, protected the dirt
beneath them from further attack by the weather, creating a
protective 'helmet' that shielded the earth beneath to leave the
rocks on tall pedestals. 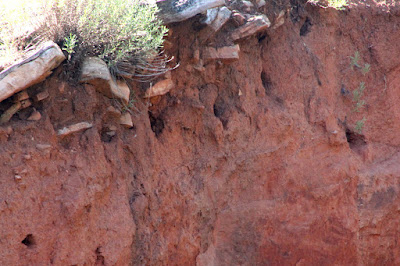 Along the remaining cliff face, swallows dig into the earth to
build nests.
Crowder Lake has an 8-mile shoreline, and was formed in 1959 with the damming of Cobb Creek.  The main extended arm north out of the lake is Cobb Creek.  Here and in the northwest arm of the lake, deltas are formed where the flowing water slows and sediment deposits to create a wide shallow area.  Once you pick your way through the shallows and reach the main channel, the stream deepens, clears, and meanders through scenic woods.  In the Cobb Creek delta, I paddled past wading cattle and a beaver lodge as I sought out the channel.  As I slowed to drift past a rock, the rock suddenly revealed itself to be the back of a huge carp that exploded in panic and threw water everywhere.  When back in the channel, the water clarity increased to two feet and the grass-covered shoreline became more interesting.  Much of the lake shoreline has steep drop-offs, but there are scattered places where you can step out to relieve the fanny fatigue, though the bottom is a bit mucky.  In Cobb Creek north of the bridge, the water shallowed into a gravel bar that gave good, clean footing and where I stopped for lunch.  When passing under the Rt. 1100 bridge, stay creek left (east side) to avoid a huge rock shelf that extends out half the creek’s width from the west bank and has a sharp edge.  Continued..........
﻿