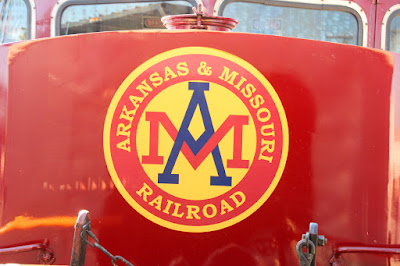 This is not a paddling tale, but was a train excursion we took
last November.  It was great fun.

Like Sheldon Cooper (Big Bang Theory), we feel there’s a lot to love about trains and railroads.  Jean has been wanting to make a rail excursion for some time, so this past November we made a 134-mile, one-day fall foliage trip on the Arkansas and Missouri Railroad starting in Springdale, Arkansas.  Of the 19 things Trip Advisor recommends doing in the area, this excursion is No. #4.  We traveled through the Boston Mountains of the Ozarks Range, made a layover in Van Buren, which sits across the Arkansas River from Fort Smith, and then returned.  The old railroad line runs through what is called ‘the Bottoms’ and follows small streams, like Rock Creek and Frog Bayou, and passes through Fayetteville, Woolsey, Winslow, Chester, Rudy, and then Van Buren.  In spite of some problems that surfaced along the way, this was a very enjoyable experience we would recommend.
﻿ 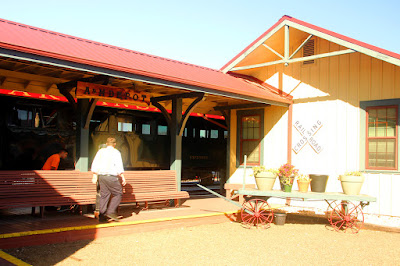 I had an eye doctor’s appointment, and of course it and the non-refundable train tickets fell on the same day as our departure.  We started the 5-hour drive to Springdale after the doctor’s visit, and since my pupils were dilated, Jean took over the driving for a while.  Heading into the mountains in November, I had packed for autumn weather, so naturally we would suddenly encounter record-breaking high temperatures.  As soon as we left the optometrist, the first stop was a clothing store for a short-sleeved cotton/polyester blend shirt to augment my duffel-filled stack of long-sleeved flannels.
﻿ 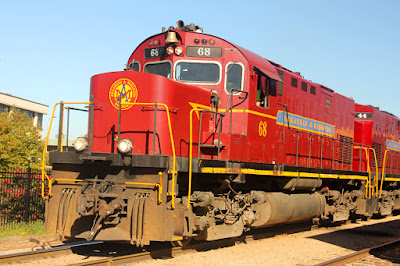 Engine 68 provided the muscle for our day-long trip.

On any trip, we have to make allowances for our traveling zoo, so I had called ahead to find a motel that would accommodate our two cats.  Fortunately, the aviary was remaining at home.  We showed up with our two-day reservation to find that the motel we had booked was only suited for wildlife of the red-lighted, two-legged variety.  The business had been given over mostly to an electronic cigarette sales operation.  We found a couple homeless men sleeping in the lobby as we walked to the reservation desk.  It was obvious that we needed to see the room before registering.  The room gave the appearance of having normally been rented by the hour.  It was dirty, run down, the quilt had tears in nearly every square foot as evidence of the numerous physical encounters between guests, and when we lifted the covers, a cockroach ran between the mattress and box springs.  I told the clerk we would have to look elsewhere.
﻿ 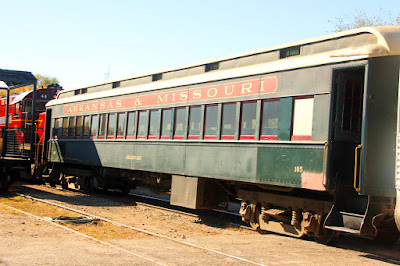 The unpredictable nature of travel now left us without a room and two cats that most businesses would not accept.  We traveled down the main road and encountered a line of ‘no pets allowed’ signs.  Another such sign was at the Super 8 Motel, but after explaining our plight, they bent the rules in exchange for a $15/per night/per cat surcharge.  So, not only was our room now more expensive, but the cats also had premium lodging for an extra $60.
﻿ 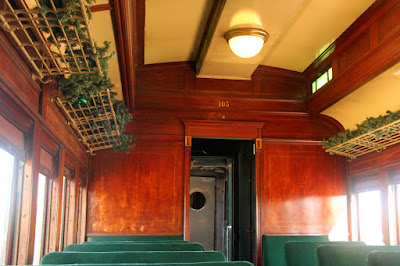 Car 105 was completely rebuilt and renovated in the Victorian
grandeur of mahogany, brass, and velvet.

The good news was that the motel was being completely renovated.  That gave us the privilege of being the first to use a new king-sized mattress and bed that had just been moved into our room a couple hours before.  The room was really nice, but the finishing touch was a huge framed wall covering that featured the Buffalo River with a canoe pulled up on a gravel bar opposite huge, sheer, 200-ft. cliffs.  The 5-by-5-ft. mural was surrounded by a satin black frame that matched the bed frame, and was particularly appealing.  If it wasn’t for being tired, I would have thrown my pillows at the foot of the bed and just laid there soaking in the view of the Buffalo River.
﻿ 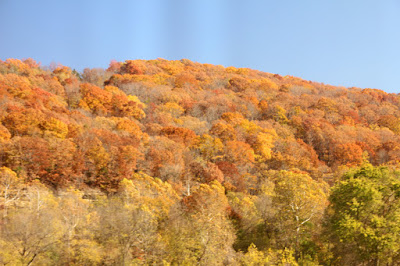 Most people understand that when you go out into nature, you
have to accept nature on her terms.  One traveler didn't get the
message.  While nearly everyone rated the trip as 5-star, one gave
it a 1 or 2-star rating because the foliage wasn't as spectacular as
he expected.  While the dro
ught had deprived the trees of their
normal fall glory, they were beautiful all the same.  The trip
itself, was still 5-star.

The bad news was that they were not finished with our room.  We had to make the room available for their crew to switch out the remaining room furnishings the next day while the two cats remained in the room during our absence for the train excursion.  The cats had to be accommodated in the bathroom with everything they would need for the day.  We had to make sure notes were left for the day manager and the work crew to ensure that the bathroom door wasn’t opened.  We had a sign posted on the door, and the doorway was barricaded with the pet carriers in case the workers ‘no habla Ingles.’  It all worked out fine in the end, but it was just that much more stress added to what should have been a relaxing getaway.
﻿ 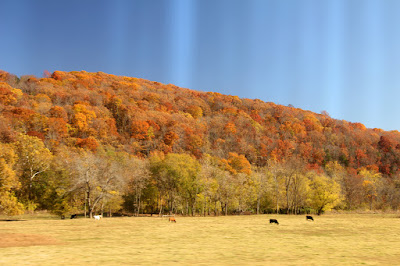