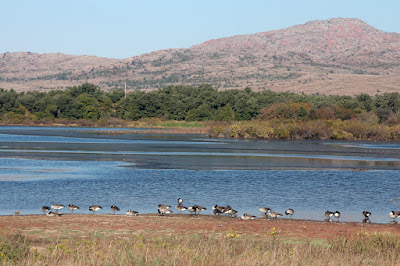 Geese love the east end of the lake and dense vegetation.
﻿
The lake is very small, with only a 3-mile shoreline.  The eastern half of the lake is shallow, with geese often seen wading knee-deep amidst a lot of vegetation.  The most scenic area is the western half of the lake that lies west of the launch at L34.71265N Lo98.63972W.  Bison can often be seen dusting themselves in the bare area west of Rt. 49, where you first turn west for the lake.  Bison, longhorn cattle, and elk roam free in the foothills of the Wichita.  The lake was created by the damming of Quanah Creek.  Rt. 49 continues east through the refuge, where you can’t miss seeing bison.  Elk are usually only seen around twilight. 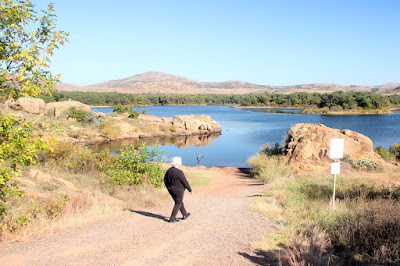 There is no formal ramp, but the road from Rt. 49 to the dam on
the south side of the lake has three pull-offs with walk-in access.
﻿

For accuracy, it should be pointed out that there is no such thing in the U.S. as buffalo.  A buffalo is a water animal found only in two areas of the world: Africa and Asia.  Early settlers mistakenly called them ‘bufello’, because of their similar appearance, and the name became stuck in the immigrant and settler vernacular.  Some argue that the name goes back as far as the French fur trappers, but there’s one thing for sure.  It is a name given by white men and never used by the original Native Americans. (Note: If you visit the area, do not do something silly like get out of the car to get closer for a better picture.  While they look lumbering, bison can run 40 mph and weigh up to 2,000 pounds.  In Yellowstone, more people have been injured by bison than by bears.) 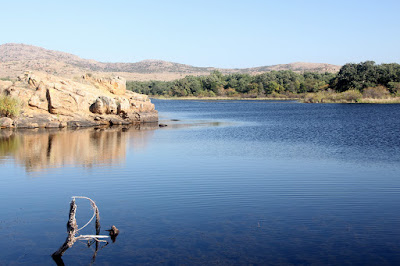 View across the lake from the launch. 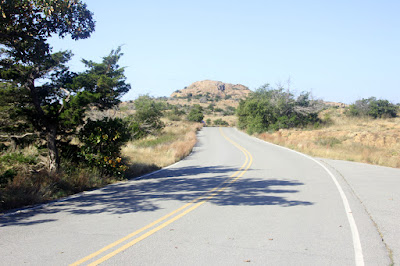 Scenery on the drive to the dam and third pull-off.