Roughing It at Canton Lake 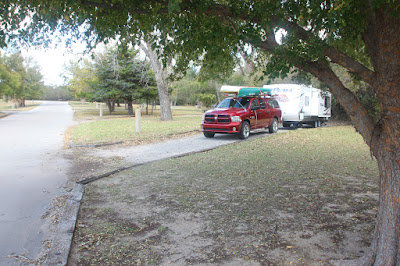 Having the campground all to ourselves.
Well, I have to qualify ‘roughing it.’  The granddaughters were off from school for a four-day weekend, so we decided to take them camping at Canton Lake.  Roughing it meant that the girls had to leave their phones at the house (OMG), and the campground that we were going to had no electric nor water at the sites, though there were water hydrants every few campsites from which to jerry jug the water we needed  With no power for heating, they would have to rely on jackets and quilts.  We went to the Longdale Recreation Area on the east side of the lake.  It was cold enough that we had the entire campground to ourselves, except for the company of billions of sandburs that got tracked into the RV’s carpets and floor mats, and occasionally, flesh.
﻿ 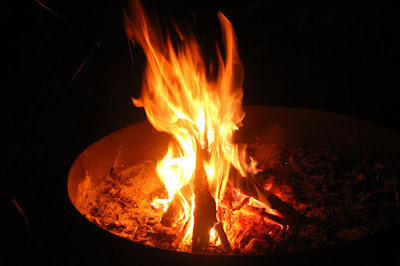 Our stay was windy, but the wind usually died down in time for a campfire.
Once we got settled in, a modest dinner featuring hotdogs and mac and cheese was cooked on the grill.  It had been breezy, but the wind settled just enough at sunset to allow a campfire.  We all grabbed jackets and folding chairs and settled around the crackling fire.  It was a beautiful evening with the occasional sound of coyotes in the background as the girls roasted marshmallows and built s’mores.  As we allowed the fire to burn down, the breeze returned just enough to cause the rustle of leaves in the cottonwoods.
The recreation area was shy on campers, but we had a consistent stream of people coming through to run their dogs.  One truck load of several dogs kept yapping until after we went to bed.  We feared they would be at it all night, but thankfully, it wasn’t too long before they reloaded all the dogs back in the truck and left us in peace.
﻿ 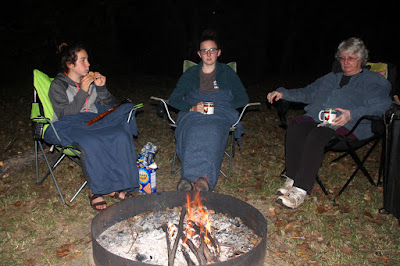 Wrapped in blankets and making s'mores.
While we had plenty of bedding, I was up in the middle of the night closing windows and vents.  The 20-25 mph cold wind whistling through the RV finally got to be a bit too much in spite of enjoying the evening sounds.  As daylight returned, the wind refused to let up and stayed with us for the day, which meant the canoes would spend the day on the truck rack.  With plenty of time to walk, read, and nap, the girls seemed perfectly content.
The next night, the mercury dropped 30-degrees to make for a chilly jump out of bed.  Running the stove for cocoa, tea, and breakfast had us nice and toasty in no time.  The sudden cool-down had the wildlife scurrying.  In spite of the cold, Lucie, the younger granddaughter, decided that   heated showers or no, she needed a hair wash.  She gathered shampoo and a towel and went out to one of the frost-free hydrants, and washed her hair.  She wrapped her head in a towel and began to dry her hair as she stood and turned to find a coyote standing right behind her just watching with keen curiosity.  Satisfied with what it had seen, the coyote just turned and trotted away. Jean, meanwhile, was having her own encounter.  She was walking around the parking lot along the shoreline when an osprey came off the lake and over the reeds with a fish in its talons.  Being surprised to find Jean there, the bird tried to climb with its freshly caught breakfast, and just cleared Jean as she was streamed with water trailing from both the bird and fish.
Woodpeckers and blue jays abounded, but it was the squirrels that fascinated us as we watched them out the window over breakfast.  We usually had the antics of one or two to watch, but with the cold this morning, we counted at least seven scurrying about, rushing from tree to tree with great determination.  The water had been flat calm at sunrise, but it wasn’t long before whitecaps returned to the lake.  That was okay, however, as we had an activity planned for the day.
The older granddaughter was 8 weeks away from her 16th birthday.  She already had her driver’s permit, but had no knowledge of cars or their care, so we spent the morning and part of the afternoon on a big orientation.  We checked and talked about all the vehicle fluids---oil, transmission, water, antifreeze, windshield washer fluid, power steering, and brake fluid.  Then we went into where to find circuit breakers and how to replace them, how to properly adjust mirrors, how to read tire wear, how often to rotate tires and check air pressure, why the oil needs to be changed and when, and where to find the spare tire, jack, and tire-changing tools.  She had no idea how to change a tire, so before she was done, she had changed a tire twice, once with me and once on her own, and figured out how to read a tire-pressure gauge without letting all the air out of the tire.  You would think driver’s education would include some generic practical knowledge, but no.
﻿ 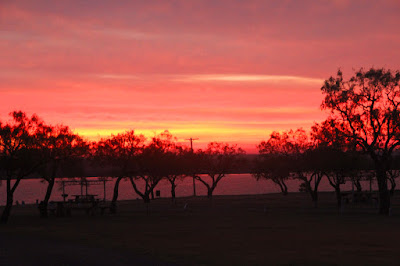 A beautiful sunset by the lake.
The paddling had been a bit disappointing, but on the third day, we finally got the canoes wet.  We had a nice breakfast of sausages, toast, pineapple omelet, and fried potato patties made from the mashed potatoes left from the evening before.  The wind was down, so we decided to launch and get on the water.  It wasn’t to be.  Within an hour the wind was back.  The girls were not able to keep control of the canoe and started squabbling in their frustration.  The water was both cold and suddenly getting rougher, so rather than having to do a water rescue and have them chilled through, it was decided to get them off the water.  The time unloading the boats and getting them on the water, and then stowing the gear and reloading the boats on the truck was nearly identical with our time underway, but at least we made the effort.  In the evening, we had a nice long campfire, our last.  It was deadly quiet and peaceful.  There weren’t even any coyotes around.  One of the most satisfying parts of the trip was the way the girls took to no-amenity camping.  I anticipated the idea of not being able to charge their phones and tablets would have them screaming into the night, but such thankfully wasn’t the case.  In the end, they said they actually preferred camping this way, but I think it being a novelty played a part in that.  The test would be if they still enjoyed it after a fourth or fifth time, or after a couple weeks.  Starting a new experience gradually is helpful.
﻿
Posted by Unknown at 10:21 PM