I went to Canton Lake for a paddle.  I mean how could I not, when the temperature is running into the mid-seventies and the wind is forecast to ease below 35 mph.?  When I got there, I was surprised by how many other victims of cabin fever had also ventured out.  There were probably two-dozen campers.  Only one was in a tent, the remainder in RV’s.

This was the Buffalo Bluffs at Canton Lake 18-months ago.  There
are actually two elevations here---one in the foreground covered with
grass, and the tall bluffs set back a hundred yards or so. 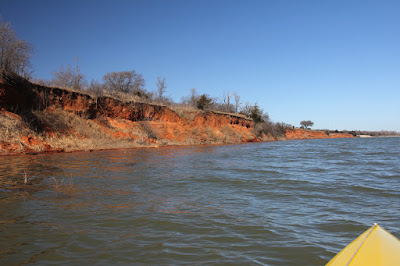 Now, with water in the lake, the surface is half-way up the tall
bluffs pictured above.

Boy, these government types take their funding cuts seriously.  Before heading out, I decided to make a head call.  I was also feeling the force of the wind and beginning to have second thoughts about launching as I watched the scattered whitecaps rolling down the lake.  I stopped at the first restroom---locked.  I drove to the second restroom---locked.  Seeing the trend, I drove back out to the pit toilet---locked.  I mean, why the heck would anyone lock the door to a pit toilet?  I had one more shot, and drove a mile north to another pit toilet with no door.  Ahh, it was open, but, of course, no TP.  No matter, I just went back out to the truck and grabbed the appropriate dry bag out of my backpack. 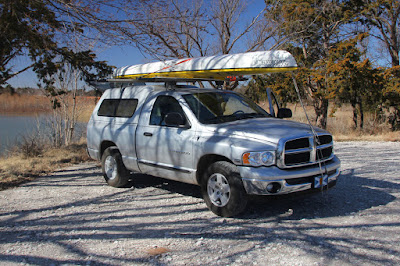 The Ram and Ibi arrive at the long-unused ramp.

I then drove around to three launch ramps to see waves rolling up the ramps.  They were usable in a pinch, but not without scrubbing the canoe on the concrete.  The lake, thank heavens, is full, but that means there is no sand or grass for a shore launch, as the lake is surrounded by riprap for erosion control.  There was an old ramp in a discontinued campground out on Cty. Rt. 2460 to the west, so I hopped back in the truck for another ride.  With the drought of the last half-dozen or more years, there had been no water within a half-mile of that ramp, but it was worth a shot. The water was all the way up the ramp; the water was smooth, and many ducks and Sandhill cranes  were enjoying the return of water and revitalized marsh.  It was an isolated and beautiful setting with only one other vehicle there. 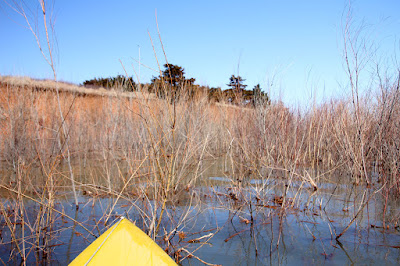 Getting out of the wind for lunch.

Once I paddled out of the protected waters, I was going north into the wind.  One thing became very apparent.  The winter had already been too long.  My arms, waist, and shoulders said I needed more time on the Total Gym.  I continued north until it was time for lunch.  With the wind still blowing, I entered a small bay and drove the canoe’s bow into a thicket to hold me fast.  I kind of rushed lunch, because I was anxious to try the WindPaddle Cruiser for a run back down the lake.  It was a nice ride, but the wind was beginning to soften.  After all, that is what winds do when one starts to sail.  But, it was a nice ride that was interrupted by only a few paddle strokes.

I just told Jean about this, so should add it for all you ladies (and men).  The mark of a good trailer operator is their backing ability.  The American Trucking Association has an annual national driver competition that seriously tests a driver's backing ability.  Unfortunately, trailer backing is usually considered a guy thing.  Many women won't even try.  The one other vehicle at the ramp was a pickup and pontoon boat trailer.  As I was about to leave, the pontoon boat came in to the ramp.  The woman jumped off while the man operated the boat.  She came up, jumped in the truck, and after exchanging a few words with me, swung the truck and trailer around, backed the trailer a couple hundred feet (at about 10 mph), backed straight down the dead-center of the ramp, and stopped at exactly the right spot for the boat operator to pull right onto the trailer.  And, this was all done in one shot with no pull-ups or straightening maneuvers, just a beautiful thing to see.  There you go ladies, grab the keys and go practice.
Posted by Unknown at 2:27 PM