The Chickasaw Nation is made up of the Five Civilized Tribes: Cherokee, Muscogee, Seminole, Chickasaw, and Choctaw.  They were forcibly removed from their homelands east of the Mississippi in the 1830’s along what became known as the Trail of Tears.  Their move to the Indian Territory (Oklahoma) was to allow for white expansion westward. The Chickasaw were first encountered by Hernando de Soto in 1540.  He immediately recognized their sophisticated governing system with their own laws and religion, and that they lived in towns and maintained themselves through farming.  The Chickasaw and Choctaw both continue to be well organized, industrious, and, honestly, unlike many of the whites around them, are quite far-sighted in anticipating needs and planning for their future.  They have their own constitution, ratified in 1856.  Dates often fail to make an impression until you realize this was a half-century before Oklahoma’s own statehood and constitution were ratified in 1907 by Pres. Theodore Roosevelt, making it the 46th state.  The Chickasaw Nation has its own Governor, Lt. Governor, legislature, judicial system and three-member Supreme Court, and are proactive in advancing education and health services for their people.  They maintain a list of approximately 200 services for tribal members that cover a broad spectrum from fine arts education, behavioral health and counseling, diet planning, sports and youth programs, employment services, voter registration, child care and elderly assistance programs, and too much to continue listing here.  They even have a program that supplies a landscaping package for new homeowners where they put in the grass, trees, shrubs, and flowers.   Their financial impact on the state’s economy in 2011 was $19 billion.  Besides the casinos they are most often recognized for, the tribal nation owns six radio stations, 18 tribal smoke shops, an inn and motel, seven motor fuel outlets, two truck stops, a family fun center, commercial golf course, health care facility, and even an outlet for fine chocolates.  They also operate and maintain a number of historical sites and museums, including the wonderful Chickasaw Cultural Center, in Sulphur, Ok., and this brings us to our visit of this facility, which I’ll feature over the next couple posts. 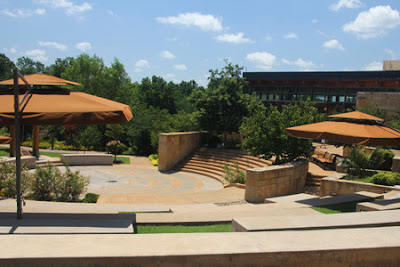 The Kochcha' Aabiniili' Amphitheater with seating for 320.  The extreme heat
on the day of our visit had forced everything inside.