The dugout canoe exhibit was central to our making the trip to the Cultural Center, and our visit was timed to make sure we had a chance to see it before it moved to another museum.  The area around Melrose, Florida, just east of Gainsville, is dotted with lakes.  In 2000, during a severe draught in the area, 101 Native American dugout canoes were unearthed in a dry lake bed.  Since then, a number of other similar, smaller discoveries have been made.  The canoes vary in age, some having been dated at 500 years of age, roughly coinciding with Columbus’ expedition to the ‘New World’, but others go back 5,000 to 7,000 years.  The Exhibition  Center was hosting the dugout canoe exhibit to recognize this discovery as well as the art of dugout canoe building in general. 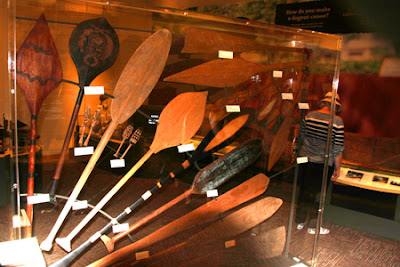 The exhibit was not just about the Florida discovery, but included a wide variety
of sources, like this display of various paddle styles. 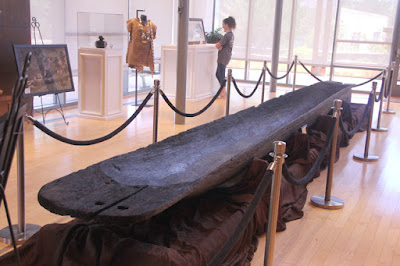 During work by the U.S. Army Corps of Engineers, this Native American canoe was found in the bank of Steele Bayou, Swan Lake, Washington County, Mississippi.  An analysis and report by Dr. Richard S. Fuller, in 1992, reported that the canoe was made from a single bald cypress tree, hewn by controlled burning and chipping and scraping with stone tools, not metal, and made and used between 1500 and 1600 AD.  The two holes in the end of the canoe on either side of the crack were likely to lace the wood together and tighten the lacings to prevent further cracking. 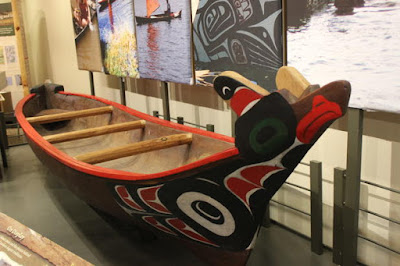 This dugout is from the First Nations tribes of the U.S. and Canadian Northwest.

Considering the resurgence of dugout canoe building and efforts to revitalize tribal culture, you may wish to seek out the video "Canoe Way: The Sacred Journey."  At http://www.canoeway.com/ you can see a trailer for the 2011 award-winning film, but unfortunately it has gone out of production, and is no longer available commercially.  It featured interviews with tribal elders, and explored the return to building dugouts and using them for youth expedition programs.  If you find a copy on the internet, grab it. 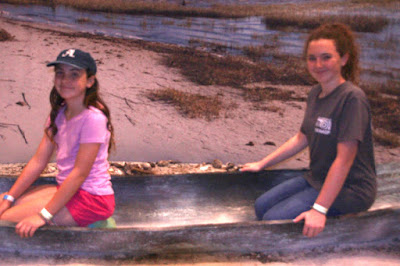 Lucie and Maggie posing in a dugout at the exhibition center.