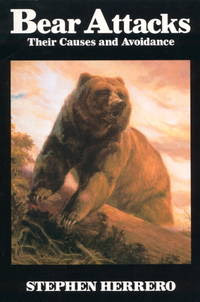 Bear Attacks: Their Causes and Avoidance, by Stephen Herrero  (pub. 1985 by Nick Lyons Books and Winchester Press, Piscataway, NJ, 260pp of text plus 27 pages of notes and index, b&w illustrations)

The author’s Ph.D was in animal behavior.  When his wife refused to visit Glacier National Park following the gruesome killings of two young women there, Dr. Herrero decided that his interests in bears should be used to reach a better understanding of bears, encounters and attacks, bear behaviors and habits, and what can be done to make bear and human interaction safer.  What followed would be a 17-year study of black and brown bear encounters dating from 1872 to 1980,  including analysis of 414 records of encounters that led to 357 injuries, as well as interviews with victims, witnesses, and other experts in bear behavior, and personal interaction with the animals.  To paraphrase the TV warning, reader discretion is advised.  Some of these accounts are gruesome in their detail.
There are no sure-fire rules or guarantees.  Many of the deaths investigated by Dr. Herrero were of seasoned outdoorsmen, game wardens, and park rangers with decades of experience with bears.  One had 42 years of such service.  Herrero quotes a psychology professor who said, “Studying nuclear physics is child’s play compared to studying child’s play.”  Both human and animal behavior is difficult to predict, and there’s always the odd terrorist or mental deviant, again, either animal or human.  Herrero says of himself that he is a scientific odds maker.  In short, his research can improve the odds, but can’t make guarantees.  Due to the absence of foolproof rules, he provides a lot of information that would help enable those concerned about safety around bears to do their own situational analysis.  These include things like where bears conceal themselves, how they feed, what makes them aggressive, how to avoid encounters, detecting bear activity, how close is too close, campsite safety, firearms and deterrents, when to know you are being just plain stupid and inviting trouble, and much more.

If you want a good read, this book is hard to put down.  If you seek insight, this book should give you the best possible understanding of why bears do what they do, and what you need to do to insure that encounters with bears are both survivable and enjoyable.  Some of the deaths were almost unavoidable, but many were the result of what we might call stupid human tricks.  This should go a long way toward correcting errors and myths, and making sure none of us do anything unwitting in the outdoors.