The Ditch and Lock

The Intracoastal Waterway, known to most who use it as the ICW, or just the Ditch, was an effort to increase the safer and faster transport of commerce along the Atlantic Coast. Cape Hatteras, called The Graveyard of the Atlantic, is still peppered with more than 600 shattered remains of vessels that tried to round its treacherous shoals. Between being a gathering place for storms and the close passage of two conflicting ocean currents, including the Gulf Stream, passage around the cape would be impossible for most of the fall and winter, and for long periods the rest of the year. The 3,000 mile inside passage of the ICW would be the eventual solution.

Southbound vessels await lowering in the lock.
In a discussion with Virginia Governor, Patrick Henry, George Washington proposed the idea of draining the Dismal Swamp and cutting a north-south canal to join the Chesapeake Bay and Albemarle Sound, the first 22-mile-long leg of the future ICW. Washington first visited the snake-infested swamp in 1763. While Washington served in a number of capacities, his life-long career was as a land surveyor, and so he served a vital part in how the canal was laid out. Anyone who travels the canal can marvel at his precision. Except for two slight elbows to line up connections with natural streams at either end of the canal, the waterway is as straight as the flight of an arrow.

With funding from a number of investors, Washington himself being a primary one, the Dismal Swamp Canal Company was founded in 1784, and construction commenced in 1793. The canal was entirely hand-dug by slaves, hired from area plantations, and indentured laborers, another wording for white slaves. They spent 12-years wallowing in mud and fighting snakes. The logs driven into the edges of the canal, to prevent the banks from caving in, have long since petrified and are still visible in many places. Tolls were charged to maintain the canal, and it was deepened in 1829.

With the lock gates opened, the parade heads south.
However, the needs for passage of ever-larger vessels with the adoption of steam power required the digging of the larger Albemarle and Chesapeake Canal parallel with the Dismal Swamp, but further to the east. By 1850, the advent of steam-powered dredges capable of biting through rock-hard cypress roots and knees shortened construction time in spite of the new waterway being much larger. In 1859, the canal opened with the passage of the first vessel, the steamboat “Calypso.” 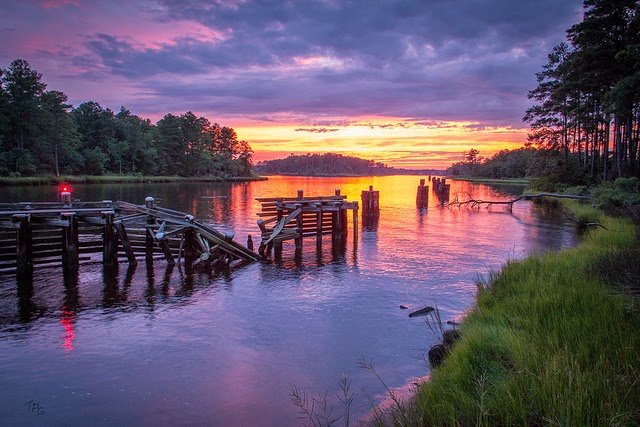 Wow, what a gorgeous shot.  The photographer was standing
in about the same place I was when I took the picture above.
I found it on flickr, and would like to give proper credit,
but there was no further information.  It is so great, I didn't
think anyone would mind you enjoying it also.
In integral part of the ICW is the Great Bridge Lock. While mile zero for the ICW officially begins in Norfolk, a short distance north of Great Bridge, for most of the over 2,000 boaters making the transit each year, the lock is where the trip really begins. On this trip, I launched the canoe from the ramps at Great Bridge Lock Park, a well-groomed 19-acre park adjacent to the lock. I’ve done the lift through the lock many times for the normally 4-foot tidal difference in water level, but I’ve always been looking up from the deck of a boat at those observing from above. This was my first time to be a spectator watching the boats lock through.