The cypress swamp showed nature in full bloom.
In the southwest corner of the lake, I encountered a channel that led west. Investigating it carried my deep into a cypress swamp. The air was filled with the songs of birds, and wildflowers grew everywhere. I went as far as I could until I was just about to run out of room to turn around.

Parts of the lake were carpeted with millions of floating seeds.
As I paddled up the west shore, I drew close to a couple of kayakers. I was about to speak to them when the man ran the bow of his kayak into low foliage of a small, young cypress tree sitting right on the edge of the shore in front of a cabin. Any chance of a conversation was ended when a man came running out the door of his cabin yelling. I first thought he was wanting them to get away from his property, but instead I heard him warning that there was a water moccasin in the cypress tree. The paddler backed away as he looked about, and said that he didn’t see anything. The man approached the tree and said that he had just been out there a few minutes before and saw it entwined in the branches of the tree. After looking about, he agreed that it didn’t seem to still be there. A bit put off by the wildlife in the immediate area, the paddling couple decided to move on down the lake.

Gliding through the cypress swamp. 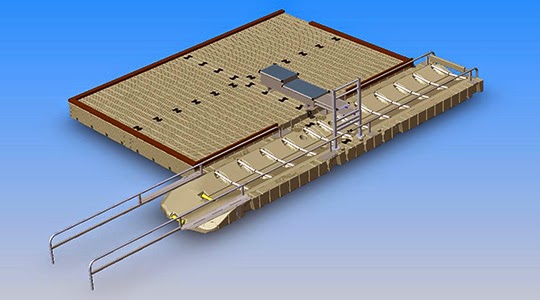 E-Z Launch.  This is a single boat launch.  The one at Stumpy
Lake could handle two boats at once, one off either end.
There were no good places for launch and take-out from the shore, but they had built a beautiful metal pier, float, and launching wharf. The wharf, attached to the end of the pier, is called an E-Z Launch, made by E-Z Port. The company made a name for itself making launch floats for PWC, or jet skis, allowing them to be literally driven onto the float and pushed off. This launch is for paddlecraft, and includes a seat the slides out over the canoe/kayak to enable disabled or elderly people to get into a canoe. This one was a double launcher, meaning it was long enough that two craft could be placed on the ramp and loaded, then launched simultaneously. Your canoe would be placed on several cross pipes covered with PVC. Once loading, you’d pull on the side rails and pull yourself onto the sloping ramp and into the water. It is fantastic for plastic boats. I saw several launch, and they shot out onto the water’s surface like a launched watermelon seed. I used the launch, since there were no alternatives, but found it greatly lacking for my light Kevlar canoe. The cross bars are far enough apart that the boat flexed alarmingly, and buckled as it passed over each pipe. There’s an area where the canoe is half on the launch and half water-borne where it is totally unsupported in the middle. The canoe clearly exclaimed that it was not having a good time. Returning, you’re supposed to just run the bow up onto the ramp, use the side rails to pull yourself up the incline and onto the flat section, and then disembark. I chose to just get the bow onto the ramp, and then stepped onto the side rails. Once I got up far enough, I stepped onto the end of the ramp, and just scooted the canoe up between my legs. I’m glad no one was taking pictures. There was nothing graceful about it, but I didn’t want to stress the canoe any further. Again, fantantastic idea and great for plastic boats, but for ultra-light craft, I’d recommend finding some alternative. Had it not been for heavy growth alongside, placing the canoe in the water alongside the float and boarding from the pier would have been the best option.
﻿

Egret
With Buddy loaded back on the Ram, I grabbed my packed lunch and waterbottle and settled at a picnic table for a quiet, leisurely lunch. It was a short trip, but everything I could want from a paddle.
﻿