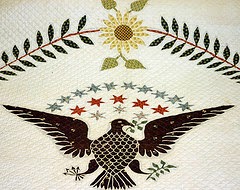 The Federal Eagle covers most of the top of the quilt, as seen
in the photo below.  Photo credits: Plains Indians and
Pioneers Museum 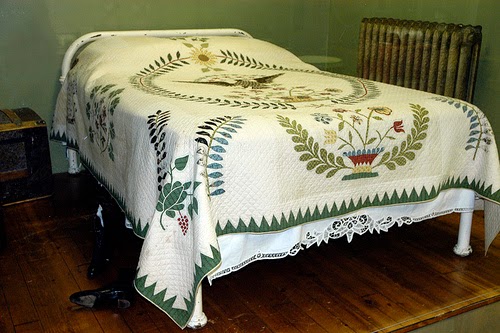 Other re-creations in the museum are Jack Garvey’s Saloon, a territorial sheriff’s office, a Parlor from an Officer‘s Quarters at Fort Supply, including a pipe organ carried West in a covered wagon, the 1903 Stock Exchange Bank, the Lee-Lienemann log cabin, and the photography studio of Frank L Saunders, whose home still stands in Woodward.

One of the displays that I found as fascinating as any other was the Federal Eagle Quilt. To me, at least, that any guy would be fascinated by a quilt is testiment enough to the incredible work that went into this quilt. I immediately found myself bending over the quilt to examine the perfectly-spaced hand-sewn 22 stitches to the inch. The quilting patterns are amazingly even, intricate, and symmetrical. The designs were created using a rare, complicated method called reverse appliqué, and the quality of the work is what makes this reportedly one of the best examples of the art of quilting in the country.

The quilt maker was Anna Catharine Hummel Markey Garnhart, born in 1773 to a couple of German immigrants. She lived to the age of 80, never needed to wear glasses, and spun all her thread by hand. She created a series of eleven such quilts to be given to her grandchildren upon their births. This one was made in Maryland, was handed down, generation to generation, and traveled west to Iowa, then Missouri, and arrived in Oklahoma following the 1893 Land Run. It has twice been flown to Washington, D.C., for special exhibitions.