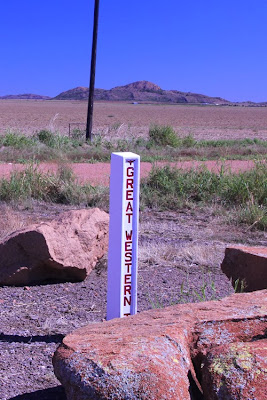 The Great Western Trail
I’m sure you’ve seen how traveling from one paddling location to another can often lead through some interesting places and history. I’ve several times crossed the Great Western Trail and the Chisholm Trail in Oklahoma. In some places the trail leaves hardly a mark, like shown here, but long-time followers of the blog will remember the picture where the millions of longhorn cattle had so depressed the earth that a house could be built in the trail rut that would be invisible from the surrounding prairie. 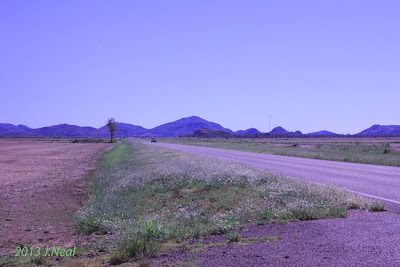 Trail bosses led cattle drives along rivers, or toward
distant obvious landmarks.
The Great Western Trail ran for a thousand miles from just northwest of San Antonio, Texas, to Dodge City, Kansas. This portion of the Great Western Trail is along OK Rt. 55 near Hobart, OK. Other lesser names have been used to identify the trail, like the Old Texas Trail, the Dodge City Trail, because that’s where it ended, or the Doan Trail, because it crossed the Red River at Doan’s Crossing, Texas. C.E. Doan kept Doan’s Store at the crossing, which was the last supply depot before entering and crossing the Indian Territory. Doan kept meticulous records of the number of cattle crossing, the name of the trail boss, and who the cattle belonged to. The peak year was 1881 when 301,000 cattle crossed. The King Ranch was the owner that moved the greatest number of cattle in a single season. They sent 30,000 cattle north in ten drives. 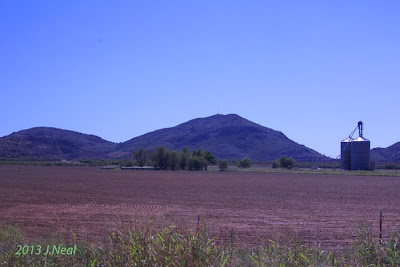 Between 1866, a year after the Civil War ended, and 1885, over seven million longhorn cattle traveled the trail, making the Great Western the most heavily used trail in the country. Along with the cattle would be hundreds of cowboys, trail bosses, chuck wagons, and remudas. A remuda was a herd of about 50 or so horses that accompanied the cattle drive, and from which the horses would be selected for the day‘s drive. Unlike the cattle, which usually just ambled along, the horses were worked hard keeping the herd together and rounding up stragglers and “bull-headed” individualists that just couldn’t follow the herd. Using the same horses would drive them into the ground, so they were continually switched out for others. Each drive would require at least ten cowboys, and each cowboy would take about seven horses. 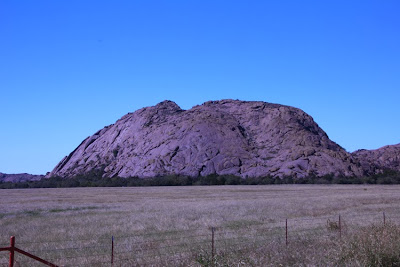 Solid rock erupting from the flat prairie.
While the trail officially went out of use in 1885, because of the availability of new railroad lines for moving cattle to market, the trail continued in use to a lesser degree until about 1892, but for a different purpose. Tens of thousands of homesteaders had moved into the Indian Territory and points north, and they were buying and driving cattle to stock their new farms and ranches.

We were headed for the Quartz Mountains and Lake Altus-Lugert on this trip. Another interesting thing this picture shows is the unusual mountain formations. The prairie is as flat as a coffee table around the mountains. There are no foothills, no preamble to the mountains at all. They just suddenly erupt from the prairie, making a perfect landmark for the trail bosses to aim for from miles away.