Neil Hartling knows the Nahanni, since he’s a river guide on the river, and has been since 1984. The book is a full-color coffee table style book with many amazing photographs of the river’s scenery. In between the pictures, Hartling weaves a narrative about the geological history of the area, the history of legend, and the history of the early explorers, miners, trappers, and adventurers that traveled the river, some successfully, and some who have left their bones there. Whether planning a trip to the North, or just enjoying the love of water and nature that we all share, it’s a book worth seeking out. 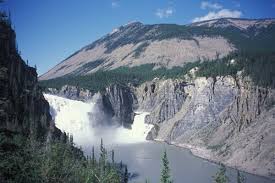 Credit: Google Images
The Nahanni River is a major tributary of the Liard River, and west of Yellowknife in the Northwest Territories. It didn’t come into prominence until the 1950’s with the great popularity of R.M. Patterson’s book “Dangerous River.” The river is now considered one of the prime wilderness rivers of Canada, and a magnet for whitewater adventurers from around the world. It is part of the Mackenzie Range, and geologically unique among rivers. Unlike most rivers that cut their course through mountainous canyons, the Nahanni was formed as a prairie river when the surroundings lands were relatively flat 500 million years ago. The mountains were then driven up through the earth’s crust while the river maintained its course.