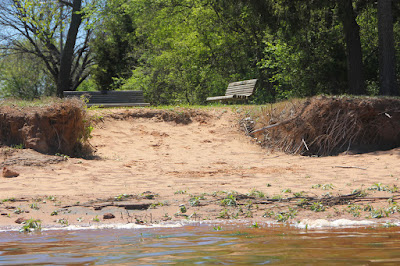 The trail leads through the park and around the lake.  Here is a great
spot where a nice landing shore combines with grass and park benches
for a beautiful spot for stretching muscles.
The National Crime Index ranks cities across the country according to how safe a resident can expect to be.  At 100%, such a city would be the safest possible place to live.  Oklahoma City has an index of 7, meaning that only 7% of the cities in the country are more dangerous than OKC.  93% of all the cities in the country are safer.  Crime rates are higher in Oklahoma City than the national average, making almost any place else safer.  For example, the chance of being a victim of a violent crime nationally is 3.8/1000 residents.  The statistical odds in Oklahoma City are 7.7, or more than twice as likely.  Then individual posts on line, like this one from 2013, add to the negative reputation: “Hefner is one of the most crime-ridden areas in OKC.  It is the city’s number one hot spot for theft, burglary, robbery, and prostitution.  Avoid Hefner at all cost.”
https://www.neighborhoodscout.com/ok/oklahoma-city/crime
http://www.letsrun.com/forum/flat_read.php?thread=5485104

But, while the dark side of Lake Hefner has been well publicized, is there a counterpoint?  I suppose it would be the effort the city has put into trying to create a beautiful and inviting green space with broad appeal.  There is Stars and Stripes Park with a large children’s playground, a golf course, two marinas for recreational boating, fishing, a nine-mile long paved jogging and biking path, an airport for radio-controlled planes, a YMCA sailing school, a convoluted shoreline at the south end of the lake with many forested bays that are havens for birds and waterfowl, and upscale restaurants along the east shore that provide dining with a view across the lake.  Lake Hefner is enjoyed and loved by thousands of local residents.  In spite of all this positive development, there are always stupid people that will seek out, or be drawn to, places where they can display their stupidity and perverted and evil natures.  Police have had to investigate assaults, robberies, and a problem with homo-sexual prostitution.  One sting alone netted 34 arrests for this activity, and police have begun regular patrols through the area.  Indeed, I saw the Oklahoma City Police patrolling even the most isolated areas around the lake while we were there.  So, what is the take-away from all this conflicting information?  I guess it would be that with any place, especially municipal parks where you can encounter two-legged wildlife, commonsense and good judgment should be practiced by the visitor.  Visit with a companion or more, utilize well-trafficked and populated areas, visit during daylight hours, especially in the mornings, and remain aware of your surroundings, which is really not different than warnings recommended for visiting shopping malls or anyplace else.  Our bottom line was this.  My wife had severe misgivings about visiting Lake Hefner.  She had indeed refused to go with me if I paddled there.  As I prepared for the trip, however, she finally agreed to go with me at the last minute.  In the end, we both greatly enjoyed the park and our day there.
﻿ 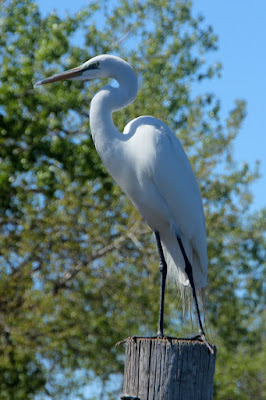 An egret poses nicely on a piling in a pier.
There are two things a paddler visiting the park should know.  There have been reports of overzealous marine enforcement on the lake that borders on harassment.  A lady I spoke with at the lake office said that has been addressed, and more efforts are being made to be more user-friendly so as to encourage more use of the lake.  One of the most unusual requirements has been for carrying running lights for paddle craft in broad daylight.  The city also requires the paddler to have a boating permit in possession while on the lake.  These are $6.25 daily for boating, another is required for fishing, and they are available also by the season.  The city has a number of local vendors where permits can be obtained.  See https://www.okc.gov/departments/parks-recreation/lakes-and-fishing/boating.
﻿ 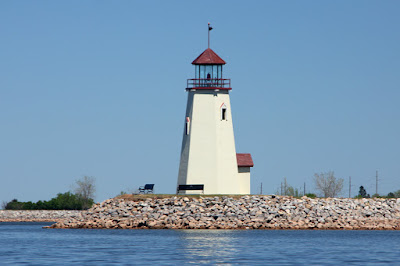 The lighthouse is along the east shore near several restaurants.  In
the evening, it makes a nice feature in a photograph of the sunset.
With a 100-mile drive to reach Lake Hefner, we got an early start.  Including a stop at Walmart’s sporting department for the boating permit, it was still 11:00 before we made it to the ramp.  (L35.54922N, Lo97.59534W)  The water was still cold, but it was a rare, calm day with air temperatures reaching 74.  Even though it was a Wednesday, the shoreline was well-populated with fishermen.  On the water, however, I was the only paddler, with fewer than six fishing boats encountered during the day.  I enjoyed the company of hundreds of waterfowl including egrets, herons, grebes, pelicans, Canada geese, gulls, Chinese geese, and osprey.  The Chinese geese are not at all sociable.  I saw one nesting on shore and wanted to take a picture, but the drakes were so noisy and aggressive, that even though I was already a good distance away, they made it clear that I’d better vacate the area or risk wearing a huge, violent goose as a hat.  I took the hint.
﻿

Ibi pausing for a rest in the southwest corner of the lake.

Lake Hefner was built in 1947 to improve water supplies for Oklahoma City.  While the south end of the lake is fairly natural and attractive, the north two-thirds of the shoreline is riprap, and the banks are high enough to provide little view of the surroundings.  The dam is at the north end.  The lake covers 2,500 acres with a 16.4 mile shoreline, and is up to 76-feet deep.
On the way home, we stopped for dinner at the Tower Café in Okarche, OK.  This is a small town that sat on the old Chisolm Trail, and at the eastern end of the Cheyenne and Arapaho reservation.  In all, it was another day well lived.
﻿