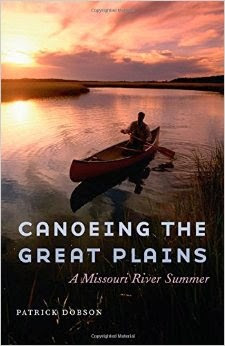 This is a very readable and enjoyable book.  It is about the restorative and rehabilitative powers of water and a canoe.  Patrick Dobson reveals he was without direction and pretty much at the end of his rope.  He didn’t know who he was, where he wanted to go in life, or how to meet his responsibilities.  The situation is well explained by the title of the first chapter---  ‘Doomed.’

The story starts in 1995, so he’s had time since then to test how his trip helped him mend and grow.  His journey began as he stepped off his porch in Kansas City and started walking, walking about 1,250 miles to Helena, Montana.  His intention was to return to Kansas City by canoeing down the Missouri River, but as he walked across the plains, the closer he got to Montana, the more apprehensive he became about the fearsomeness and size of the mighty river.   A talk with a fishing guide in Helena didn’t help when she assured him that he would die.

His canoeing experience amounted to passing out drunk in the bottom of a canoe ten years earlier with no memory of how he got home.  Thinking he might benefit from some paddling instruction, he sought the help of an outfitter, who recommended an instructor.  The instructor took Dobson and his 16-ft. purple canoe to a Helena park lake.  When he tried to teach the author how to J-stroke, Dobson flipped the canoe.  When he tried to teach the author how to sweep, Dobson flipped the canoe.  He finally told his student to always wear his PFD; he was going to need it.  Hoping his instructor would contradict the fishing guide’s doom and gloom, he asked the instructor if he had paddled the river.  The response was basically, “Not me.  Too dangerous.”  Mr. Dobson’s start was as unsteady as his confidence, but the river quickly taught him what he needed to know.  Not only did the author make a go of it, but he became so comfortable with the river life that his apprehension grew about how he would manage when he got ‘home.’  He had learned enough by the time he was within a couple weeks of his destination, that he took another dejected paddler under his wing, who was about to quit, and helped him finish his trip as well.  Along the journey, you will share every emotion and every mosquito between Helena and Kansas City, and by the last page, you also will feel better for the experience.