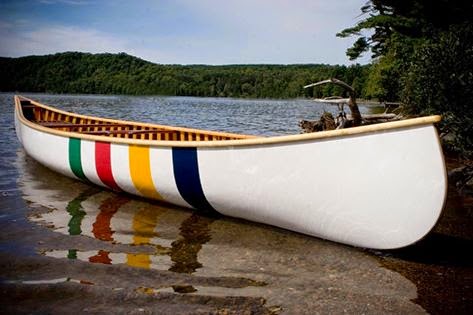 A beautiful classic canoe.  I believe credit for this picture
goes to Macky Mongold.  It was painted to represent the
Indian wool trading blanket made popular by Pendleton
Mills.
Sorry for the silence and the apparent neglect. The absence was brought on by a family emergency. I didn’t want to advertise our being gone, but can now shed some light on what happened.

Without betraying my brother’s privacy, we received word that he was experiencing a serious illness that would require two complicated surgeries right away. Since there was no other family in his area for him to turn to, I volunteered to help. His recovery would require 6-8 weeks, so we put our show on the road.

I took Buddy, my 14ft. Solo Hornbeck Adirondack pack canoe just in case, but knew going in that it would see more time on top the truck than in the water. There were other things that would require my attention.

It was a four-day trip east to Chesapeake, VA, that included finding homes for Jean’s young rescued orphaned squirrels. When we arrived at my brother’s, his condition became all too obvious. I saw someone standing outside in anticipation of our RV’s arrival, which was to be parked in his drive. I thought the stranger was some old guy visiting at my brother’s. I got the rig parked, got out and walked around the truck, getting within 20-feet before recognizing my own brother for the first time. He looked gray. He looked yellow. He was a skeleton. He had not kept solid food down since Halloween, or six months previously.

They decided to do both surgeries simultaneously. He was unzipped from sternum to as low as they could go. Part of the problem lay in the fact that he had never been in a hospital before, and was very nervous about the process, so had delayed treatment for way too long. Everything would have been much less involved if he had sought help much sooner.

Anyhow, he is doing much better. Every couple days he still has to overcome yet another hurdle, but progress has been great. We’re home; we’re exhausted, and will slowly put things back to rights. He, likewise, takes on a new project every couple days after being able to do nothing, and is looking forward to returning to work. C’est la vie, no?