The Delight of Range Marks 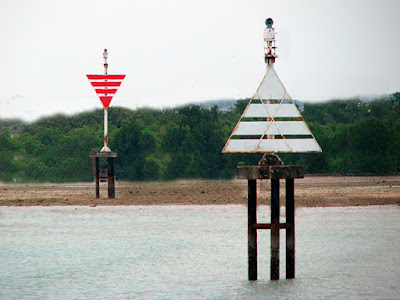 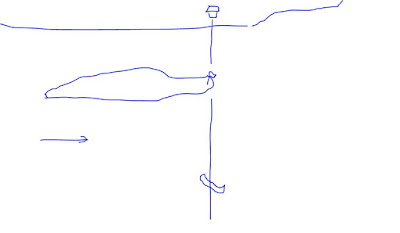 Wanting to reach the end of an island with the wind
pushing us off course, we line up the flag in the foreground
with the house in the background.  As long as they remain
in line, we will reach our destination even though the canoe
is pointed way off course.
Let’s say you are headed toward the tip of an island.  The wind is from port (or the left) and will try to blow us away from the island.  You want to arrive right at the tip so you don’t get set way downwind and have to fight back against the wind and waves.  You find something on the point of the island, like an isolated tree, boulder, house --- anything.  In the background you look for another mark on the mainland in the background that is close to being in line with your front or reference mark.  If it is some greater distance off, we may not see individual objects, but you can still see dips in the tree line, major construction, smokestacks, grain elevators, etc.  If the sun is starting to approach the horizon, you might use a light or a star as a second mark.  We line the two marks up, hold our heading, and watch the rear mark.  If the rear mark drifts off to the right, or downwind, we are losing ground.  You begin to come closer to the wind until the two marks line up and stay stationary.  Paddling at that angle to the wind will take you right to the tip of the island without the loss of any ground you would have to make up.  If the waves are big enough, you may be wanting to hold the bow at a safe angle into the waves.  The range marks will tell how high you can point into the waves, or allow yourself to fall off the wind, without losing ground to leeway.
Range marks can also be used for safety purposes.  You are being met by a powerboat heading toward you at a converging angle.  Will he pass you at a safe distance, or is there a risk of collision?  Line the boat up with a mark behind him, and see how the background moves.  If the background move to the left of the boat, we will be to his left when he passes.  The opposite will be true if the background progresses to the right of the boat.  If the background does not move, you are on a collision course and at risk of being run down even though he may be some distance away.  You have created three points on a line: you, the boat, and a mark in the background.  Unless someone alters course, the boat will travel that line right to you.
By the same token, let’s say you see a canoe you know, and you’d like to join up with him.  Regardless of which direction he is going, if you are on a converging course, line him up with an object behind him.  Alter your course so the background remains stationary, and you will meet him unerringly without regard for normal set and drift.
If the surroundings don’t offer the best marks you would like, then create your own marks.  A fish trap or a buoy can be used for one point.  Even a cloud can be used, and the further away the better, but clouds move.  It will give you immediate feedback on your current situation and enable you to set an appropriate heading that corrects for set and drift.  Minutes later, you will have to find another cloud to confirm that conditions haven’t changed.  Even with a compass heading, the heading can remain fixed as you slide off a considerable distance off the desired track.  With a compass capable of offering bearings, range marks will enable you to paddle on in greater comfort by watching distant marks rather than little lines on a dancing card.  If you start with a compass heading from your map, as soon as you get underway, pick a set of range marks for that heading.  Following the range will not only be easier on the eyes and nerves than trying to watch the compass card, but they will also factor in any leeway you may be experiencing.  If you haven’t been accustomed to using range marks, start practicing with them.  You will acquire a skill that will serve you well for the rest of your life.
﻿

prev|rnd|list|next
Content, text, and pictures on this blog are protected and are not to be reused or published without the author's consent. Thank you.